Every year, the Shoah Memorial organizes one-day trips to Auschwitz-Birkenau, the Nazi concentration and extermination camp where nearly a million Jews were murdered.

Shoah Memorial historian-guides accompany the trips, which are intended for all.

The Memorial offers the heads of local communities, institutions and organizations the possibility of including a journey of remembrance in an overall commemoration and training project, depending on their wishes.

The trips take place from January to March. The 2017 dates will be on this page soon.

Before the journey, participants may attend a planning meeting at the Shoah Memorial and take a self-guided tour, usually with an Auschwitz survivor. 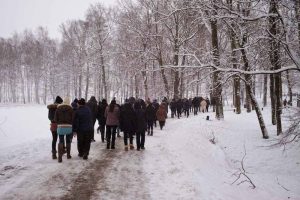 TRANSPORTATION (times are indicative)
Meet at 5 a.m. at Roissy-CDG. Take-off for Krakow at 7 a.m. on a charter flight. Arrival in Krakow at approximately 9 a.m. Round-trip Krakow-Auschwitz transfer by bus. Return to Roissy-CDG at 11:30 p.m.

CONTRIBUTION TO COSTS
€360 per person. Includes transportation, breakfast and a vegetarian meal served on the plane (a kosher meal may be ordered when booking for an additional charge of €30), taxes, tours and repatriation insurance.

REMARKS
Bring warm clothes and a light meal such as a sandwich. Due to restrictions on carrying liquids on planes, beverages are not advised.
Participation of children under 15 is not advised.