Screening : Filming the Camps, from Hollywood to Nuremberg A film by Christian Delage. 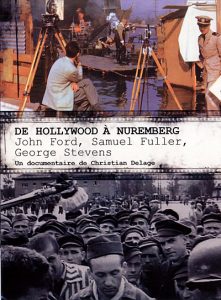 Introduction and Q&A with the Director and Curator of the exhibition.

Hollywood directors John Ford, George Stevens, and Samuel Fuller entertained audiences with cinema classics like The Grapes of Wrath, Shane, and The Big Red One. But their most important contribution to history may have been their work in the U.S. Armed Forces and Secret Services, filming the realities of war and the liberation of Nazi concentration camps. Their documentation provides an essential visual record of WWII. Combining a wealth of rare material, including private letters and footage from their own personal archives, From Hollywood to Nuremberg explores these filmmakers’ experiences during and after WWII, their confrontation with Nazi atrocities, and the mark that left on them as artists.

George Stevens directed the Special Coverage Unit during the war under orders from General Eisenhower. His unit covered D-Day, the Allied march through France and the liberation of Dachau–with the concentration camp’s conditions, casualties, and survivors captured in still-stunning black-and-white and color footage. During the war, John Ford headed the Field Photographic Branch, crafting two Oscar-winning documentaries about Pearl Harbor and Midway. While stateside during the conflict itself, Ford used Stevens’s Dachau images for a contemporary film about Nazi atrocities that was later used as evidence at the Nuremberg Trials, whose filming Ford also oversaw. Unlike Ford and Stevens, Samuel Fuller wasn’t specially commissioned or trained for his role as a wartime documentarian. The son of Eastern European Jewish immigrants, Fuller joined the infantry in 1942 and, at the instruction of his captain, filmed the liberation of the Falkenau camp with a camera that Fuller’s mother had sent him. It was the first filming experience of a man who would go on to be a major American director, and whose 1980 movie The Big Red One would directly reflect upon his own wartime experiences.

From Hollywood to Nuremberg is presented in conjunction with “Filming the Camps: John Ford, Samuel Fuller, George Stevens, From Hollywood to Nuremberg,” a special exhibition at Los Angeles Museum of the Holocaust curated by Christian Delage, designed, created, and distributed by the Mémorial de la Shoah (Paris, France), and made possible through the generous support of SNCF.

Director Christian Delage is a historian, curator, and filmmaker whose earlier credits include the documentary Nuremberg, The Nazis Facing Their Crimes

Los Angeles Museum of the Holocaust