What’s new at the archives?

ITALIAN ARCHIVES AT THE SHOAH MEMORIAL, MAY 2016

The Shoah Memorial has received four new collections from the Milan State Archives, Archives of the Jewish Community of Venice, archives of the Union of Jewish Communities of Italy (UCEI) and Liliana Bucci, an Auschwitz survivor and one of the last Italian witnesses of the Holocaust.

The Memorial has signed agreements with those institutions and Mrs. Bucci in order to digitize documents on the persecution of Italian Jews between 1938 and 1945.

The acquisitions are part of a wider project focusing on Italy. Since June 2015, the Memorial has formed partnerships with several Italian State archives and Jewish community archives with the aim of giving researchers easier access to Italian Holocaust sources.

Very soon, we will receive collections from the State archives in Pisa, Rome and Turin.

Here’s a glimpse of the recently acquired collections:

On March 29, 1944, seven-year-old Liliana Bucci, nicknamed Tatiana, was deported from Risiera San Sabba (Trieste) on transport 25T. On April 4, she reached Auschwitz with her five-year-old sister Alessandra (“Andra”), mother Mira Perlow, grandmother Rosa Farberow, aunt Gisela Perlow and cousin Sergio de Simone. Mistaken for twins, Tatiana and Andra were sent to the Kinderblock and kept apart for medical experiments but managed to escape before any harm could be inflicted on them. Mira and Gisela Perlow also survived. Little Sergio was subjected to medical experiments at Neuengamme concentration camp before being killed at Bullenhuser Damm near Hamburg. Grandmother Rosa, aunts Sonia and Paula, uncles Aron Ernesto and Giuseppe Yossi and cousins Mario and Silvio Perlow died in Auschwitz or Ravensbrück.

On January 27, 1945, Tatiana and Andra were liberated by the Red Army and placed first in a Prague orphanage, then in a Jewish education center in Lingfield, England headed by Alice Goldberger. After a long search by their parents Mira and Giovanni, in December 1946 the family was back together again in Trieste.

In the 1980s, the Bucci sisters started testifying and working to preserve the memory of the Holocaust in Italy by participating in commemorations and trips to Auschwitz organized by Italian institutions. Titti Marrone told their story in Meglio non sapere, published by Laterza in 2006. 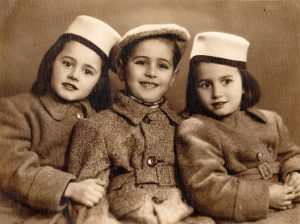 The collection from the archives of the Prefecture of Milan and Varese has 92,100 documents on the application of racial laws in Lombardy from September 1938 on.

The period of deportations under Nazi occupation is also well documented: between December 1943 and January 1945, 14 transports of Jewish deportees left platform 21 at Milan’s Central Station for Auschwitz, Bergen-Belsen, Ravensbrück and Flossenbürg.

The Nazis deported 896 members of Milan’s Jewish community; only 50 survived.

Archives of the Venice Jewish Community

The collection from archives in the Renato Maestro Biblioteca-Archivio has around 56,000 documents on the application of racial laws during the Nazi occupation of Venice.

Between December 1943 and August 1944, 246 Jews were deported from Venice. Among them were many elderly people in the Jewish community’s old age home, including Grand Rabbi Adolfo Ottolenghi.

Archives Archives of the Union of Jewish Communities of Italy (UCEI)

The collection has approximately 17,000 documents on the application of racial laws starting in September 1938 and on the internment and deportation of native and foreign-born Jews living in Italy.

It also contains extensive documentation on the activities of DELASEM (Delegation for the Assistance of Jewish Emigrants). 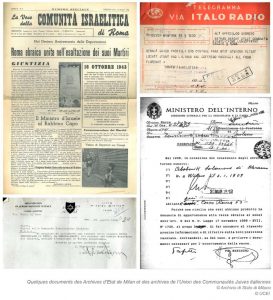 All the documents are now accessible in the Shoah Memorial reading room. 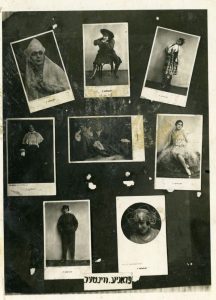 In 1975, comic book author Serge Mogère visited a house in Choisy-le-Roy threatened with demolition and found a magnificent old photo album, apparently left behind by the former owners. Intrigued by the family pictures, the faces and the period clothes, he decided to keep it. In February 2016, Mr. Mogère gave the album to the Shoah Memorial.

By dint of long, hard work, the archival staff eventually determined that the album dates back to the years 1920-1940 and had belonged to the Punski family, immigrants from Warsaw. It includes pictures of a famous actress, Franya Winter, executed by the Germans in 1942 in the town of Ashmyany (today in Belarus). 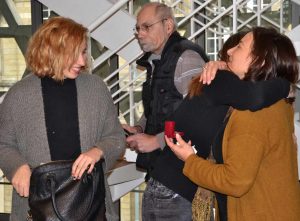 The Shoah Memorial documentation center’s staff investigated and eventually located a member of the Punski family in the United States, Meryl Frank.

Ms. Frank, who, incidentally, is the United States Ambassador to the United Nations Commission on the Status of Women, sent the Memorial a family tree showing that one of Franya Winter’s brothers had immigrated to France in the 1920s and was deported on transport five, leaving behind a wife and child, of whom no trace has been found. 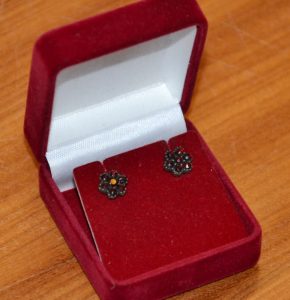 Ms. Frank traveled from the United States to Paris to visit the Shoah Memorial for the first time, on February 18, 2016, when she met Mr. Mogère. Both came with their daughters. Ms. Frank gave Mr. Mogère’s daughter a pair of earrings that had belonged to Franya Winter’s mother-in-law, Malka Punski, who also perished in the Holocaust.