Tribute to Sarah Montard, survivor of the Auschwitz-Birkenau camp, who died on February 21th, 2022. 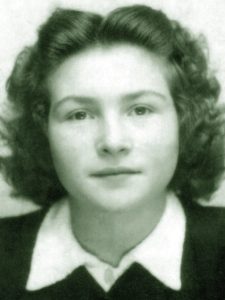 Sarah Montard was born on March 16, 1928 in the free city of Danzig and declared Polish. His parents, Moses and Maria, née Korenbaum, were married in 1927. They are lay people and anarchists. The father is a journalist, the mother a seamstress. In October 1930, the family was in Paris and settled in 1932 in the 20th district.

Moses was mobilized in 1939 in the detachment of the Polish Army in France.

Sarah was sent in January 1940 to a Children’s Relief Society house on the French Riviera in Boulouris, where her mother picked her up in July.

On July 23, 1941, his father was arrested in Paris and interned in the Pithiviers camp in the Loiret, from where he managed to escape in early September 1941. He then goes underground.

On July 15, 1942, a high school friend told Sarah that a mass arrest was being prepared. But Sarah and her mother are arrested the next day by the French police. At 14, Sarah’s childhood changes. Driven to the Vél d’Hiv, they manage to escape the same day. They in turn go underground. Sarah nevertheless continues her schooling at the high school of girls of the Vincennes course in Paris.

On May 24, 1944, at 7 a.m., two plainclothes inspectors came to arrest Sarah and her mother following a letter of denunciation sent by a neighbour. Taken to the depot of the Palace of Justice, they are interned the next day in the camp of Drancy.

On May 30, 1944, Sarah and her mother were deported to Convoy 75 for the Auschwitz Auschwitz camp by Convoy 75. They arrive on June 2 on the Bahnrampe of Birkenau. They are assigned to the outer Kommandos in which they carry out exhausting work. Separated from her mother at the end of October, Sarah was sent to Auschwitz-I camp.

On January 18, 1945, the camp was evacuated. During the «death march» she met her mother and they arrived together at the Bergen-Belsen camp. Sarah will meet Anne Frank.

Released by the British army on 15 April 1945, they returned to Paris on 24 May 1945, a year to the day after their arrest. They find Moses who may have been hiding.

Sarah worked between 1952 and 1956 at the Reuters agency and then headed the secretariat of a basic research laboratory at the Natural History Museum. In 1946 she joined the Amicale d’Auschwitz and in 1979 joined the Association of the Sons and Daughters of Jewish Deportees of France, assisting Serge Klarsfeld at the Cologne trial in 1980. From 1985, Sarah will testify on many occasions, including at the Shoah Memorial, and accompany dozens of study trips to Auschwitz.

Sarah Montard was made an Officer of the Legion of Honour and Commander of the Palmes académiques.

In 2011, Sarah Montard published her testimony to the editions Le Manuscrit in the collection Témoignages de la Shoah, with the support of the Fondation pour la Mémoire de la Shoah: Hunt black butterflies. Story of a survivor of the Nazi death camps.”

The Shoah Memorial pays tribute to a great activist of memory and sends condolences to her children and loved ones.