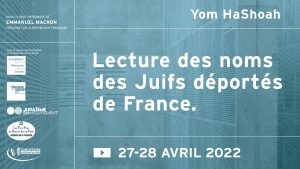 The ceremony of Yom HaShoah is the date chosen by the State of Israel for the commemoration in memory of the victims of the Shoah and the heroes of the Jewish Resistance during the Second World War, it takes place in the form of an uninterrupted 24-hour public reading, day and night.

Of the 76,000 names inscribed on the Wall of Names, the names of deportees from France are pronounced, one by one. Some 200 people, former deportees, parents, volunteers, children… read in turn, from the lists from the Book Memorial of the deportation of Serge Klarsfeld, (ed. Association of FFDJF), the names of «those whose name remains only» (Simone Veil).

The ceremony is open to the public on the square of the Shoah Memorial from 7 pm to 1:45 am and from 6 am to 7 pm.

Event organized under the aegis of the Foundation for the Memory of the Shoah, in partnership with the Judaism in Movement (JEM), the association of the Sons and Daughters of the Jewish deportees of France (FFDJF) at the initiative of this ceremony, and the Consistory of Paris.

Meeting – 80 years after the Vel d’Hiv. History and memory of today’s round-up