New ! Exhibition “By the grace of God”
The Churches and The Holocaust exhibition 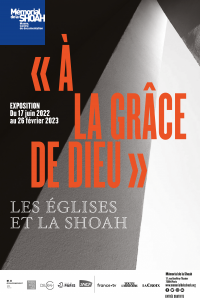 How could the Nazi regime implement the assassination of Jews in the heart of Christian Europe, before the eyes of the clergy and faithful? Between prejudice, diplomacy, mutual aid and resistance, why did the men and women of the Church protest and act when others remained silent? For eighty years, these questions have continued to question the European conscience.

Beyond the polemics, the recent discoveries related to the opening of the Vatican archives and a renewed historiography, offer the opportunity to establish the positions of the Christian, Catholic, Protestant and Orthodox Churches, facing the Shoah by placing them in a longer context, from the tradition of Christian anti-Judaism to recent memory.