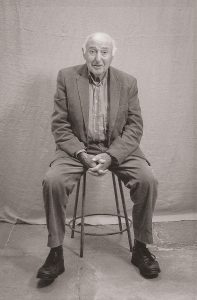 Elie Buzyn was born in Lodz, Poland on January 7, 1929.He comes from a well-to-do family, his father is a business manager, his mother is active in the WIZO. He is the youngest, his brother Avram is 11 and his sister Tauba is 5.

Elijah was 10 years old when Poland was invaded in 1939. While the Jews are now forced to join the ghetto, his brother is killed on March 7, 1940 for example. His parents are destroyed. Elijah suddenly understands that he has become a breadwinner and he will have only one obsession: to protect his own.

In January 1942, he secretly celebrates his religious majority, during which his mother, exhausted, asks him to do everything to survive and to join the two brothers she has in Paris.

While the Nazis elected in the autumn of 1942 the Jews could no longer work, Elijah managed to avoid deportation to the camp of Chelmno to his parents and sister. The family goes underground.

Faced with the advance of Red Army troops, the ghetto was liquidated and the population transferred to the Auschwitz-Birkenau camp in August 1944. The family is dislocated during the selection on arrival. The parents are murdered in the gas chambers. Elie and her sister join the camp. He is 15 years old. He is then transferred to the Auschwitz I camp and then assigned to the agricultural kommando of Babitz.

On 18 January 1945, he was evacuated to the Buchenwald camp, which he reached three days later. Wounded, he is sent to the Revier and manages to avoid the amputation of the toes. Thanks to the action of the underground resistance, he joined Block 8 of the «big camp» where hundreds of Jewish children are gathered and helped.

After the liberation of the camp on April 11, 1945, a thousand Jewish children were taken in charge by the children’s relief work, 426 of whom were received in France. Among them, Elie who finds after a few weeks her maternal uncle, Dr.Léon Pérel, then her sister repatriated from the Bergen-Belsen camp.

In October 1947, Elijah left for Palestine to participate in the war of independence and the birth of the State of Israel.

He returned to France in 1954 and joined Oran in Algeria as an internship supervisor, while passing his baccalaureate. Two years later, he settled permanently in Paris and began studying medicine. He became an orthopedic surgeon.

Retired in 1995, he carried out humanitarian missions in Africa, notably in Mauritania and Cameroon.

He began to testify about his experience during the Shoah in 1998 and did not stop intervening in front of classes all over France, while also campaigning within the Children’s Relief Work. He concluded his remarks by calling on his audience to become “witnesses”.

An accomplished sportsman, he was selected to carry the Olympic flame at the 2006 Olympic Winter Games in Turin.

Elie Buzyn was made a Knight of the Legion of Honour in 2014 and a Commander in the Order of Academic Palms in 2017.

The Shoah Memorial salutes the memory of a great witness to the Shoah, a generous and modest man with luminous humanism, and offers his condolences to his wife Etty and his family.